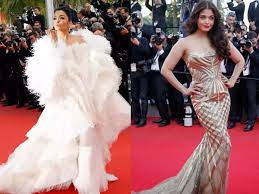 Aishwarya Rai Bachchan, who is walking the Cannes 2022 red carpet, believes that walking the red carpet may be as intimidating as one imagines.

Since leaving for the 75th Cannes Film Festival earlier this week, Aishwarya Rai Bachchan has been making headlines. Her husband Abhishek Bachchan and their daughter Aaradhya Bachchan were also present. To be sure, Aishwarya’s red carpet outfits from Cannes have always been the talk of the town, and the blue-eyed beauty has mastered the art of leaving everyone speechless.

During a recent interview with Film Companion, Aishwarya Rai was asked if walking the red carpet still intimidates her, despite the fact that she has done so many times.

Aishwarya responded, “It is as daunting as you make it out to be. The natural notes that you have to bear in mind will always be there and it all boils down to….. sometimes you have to try and make it as comfortable for yourself as you can. It’s just about kind of having the Buddhist zen approach to it. At the same time, it’s about you’re a professional, you are there for a reason. So be the professional but be calm and be yourself and you can’t take it that seriously at the same time, you can’t be frivolous about it. And everybody is such a true professional. So that’s something that you give to it. There are so many professionals working with you on it. So, of course, it’s about reciprocating the respect and the work put in by everybody and that’s what you go out there and do. So sometimes, you are comfortable, sometimes you make it look comfortable. So, you kind of have to work on it and you work it”.

In the meantime, Aishwarya Rai Bachchan’s next film will be Mani Ratnam’s Ponniyin Selvan. She recently spoke with Film Companion about her collaboration with Mani Ratnam and stated, “I’m blessed that I’ve had the opportunity to work with someone like a director and a talent like Mani Ratnam over the years on so many more projects and memorable films and great learning experiences for me as a growing artist. And I keep saying growing because you continue to even now, even tomorrow with every experience. So, I am blessed that I’ve got the chance to work with Mani so many times and now on this Ponniyin Selvan.”

Also Read: Abhishek Bachchan wants to go on Long Drive with his Wife and Daughter