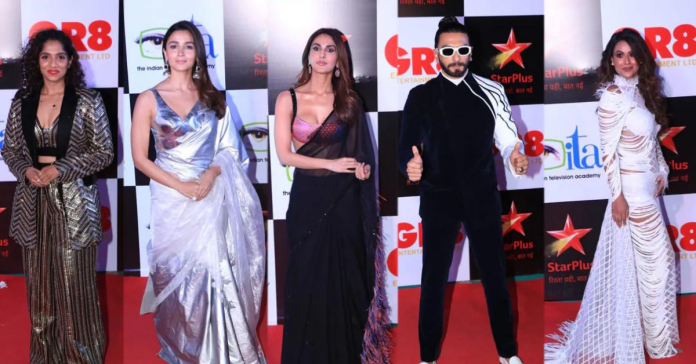 A slew of Bollywood and television celebs were spotted on the red carpet of the Indian Television Academy (ITA) awards on Sunday evening. Alia Bhatt looked stunning in metallic saree and greeted shutterbugs with her Gangubai Kathiawadi-style namaste. While Rakhi Sawant stole the show with her antics, Ranveer Singh too joined her on the red carpet and shared some dance moves together.

Rakhi was decked up in a black outfit and a huge rose-shaped bonnet, and told Ranveer that she had dressed as a “tree”.

Vaani Kapoor looked gorgeous in a black and pink saree at the event. While filmmaker Karan Johar attended the awards in a black floral suit.

Nia Sharma was seen in a white fishnet gown with a trail. While, Kashmera Shah and Rashami Desai walked the red carpet in pink and purple gowns, respectively.

Hina Khan walked on the red carpet in an off-shoulder black gown and dramatic eye makeup. Anupamaa actor Rupali Ganguly was seen at the event with her family and took home an award as well.

Previous articleHow is the movie, Alone?
Next articleUday Chopra looks unrecognisable as he gets spotted at the Mumbai airport