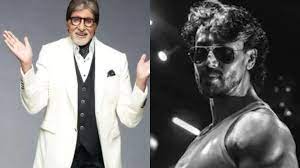 Tiger Shroff has every cause to be ecstatic right now. After all, he awoke to a touching message from Amitabh Bachchan praising his kicks. This occurred when the industry’s megastar uploaded photos of himself with Boman Irani, in which he attempted to imitate Tiger’s kick in order to gain social media likes. Amitabh replied in response to the post, “seeing Tiger Shroff getting all those ‘like’ numbers through his flexible kick abilities, I thought I would also give it a try, in the hope of getting even a small percentage of ‘likes’”.

Soon after, Tiger re-shared Amitabh Bachchan’s message, expressing his delight at the superstar’s praise for his adaptability. The Student of the Year 2 star wrote in the caption, “Ok…had to take this opportunity and show off a little when the greatest star of our country and the greatest action hero had some generous words for me. On a serious note sir if I still can kick like you even a few years later, it will be a blessing #legend #mrbachchan #blessed”.

Meanwhile, Tiger Shroff is preparing for the premiere of Heropanti 2, the sequel to his critically acclaimed debut film. Heropanti 2, which also stars Tara Sutaria and Nawazuddin Siddiqui, will collide on April 29 with Ajay Devgn, Amitabh Bachchan, and Rakul Preet Singh’s Runway 34.

Previous articleShraddha Kapoor says she wants to shoot a comedy film with her father Shakti Kapoor and that it will be “amazing”
Next articleIn this new ad for Bhool Bhulaiyaa 2, meet Kartik Aaryan’s ‘Saheliyan’