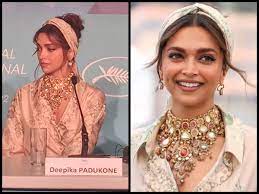 Deepika Padukone has been the talk of the town lately, thanks to Cannes 2022. For the uninitiated, the Goliyon Ki Raasleela Ram Leela actress will be on the famous event’s jury this year. Deepika Padukone has already arrived in Cannes for the 75th Film Festival. It goes without saying that all Deepika Padukone admirers around the world are ecstatic. The Gehraiyaan actress made waves lately after her first look from Cannes was released. Deepika had gone out for supper with the other members of the jury.

Deepika Padukone chose Louis Vuitton’s Fall 2021 collection for her first appearance at Cannes, and her make-up was flawless. Since the release of photos of her first look at Cannes 2022, people have been gushing over the actress and marvelling at her appearance. Fans expressed their pride in Deepika for making it to the jury of the 75th Cannes Film Festival in the comments section. According to a fan, “Simply beautiful…. Proud”. Fans even used heart and fire emojis to compliment Deepika’s appearance.

Meanwhile, on the job front, Deepika Padukone has a number of exciting projects in the works. She is now working on Shah Rukh Khan’s comeback flick Pathaan, in which John Abraham also stars. Deepika will also appear in Siddharth Anand’s Fighter for the first time, sharing screen space alongside Hrithik Roshan. She’ll also be a part of the Bollywood adaptation of the Hollywood film The Intern. In Nag Ashwin’s Project K, Deepika will collaborate with Prabhas for the first time.