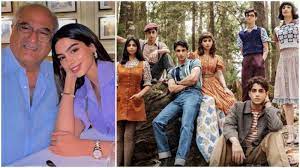 Boney Kapoor is a pleased parent, as his younger daughter Khushi Kapoor joins The Archies.

In Zoya Akhtar’s The Archies, Khushi Kapoor will make her big Bollywood debut with Shah Rukh Khan’s daughter Suhana Khan and Amitabh Bachchan’s grandson Agastya Nanda. Mihir Ahuja, Dot, Yuvraj Menda, and Vedang Raina are among the cast members. The film’s first look and teaser were published on May 14, and the response has been overwhelmingly positive. It will premiere on Netflix in 2023 and is based on the iconic Archie comics.

In a recent interview with ETimes, Boney Kapoor shared his delight at his daughter Khushi’s upcoming film debut. He also said that Janhvi Kapoor was instrumental in her younger sister’s debut. After Janhvi began filming her debut film, Dhadak, in 2018, Khushi indicated her ambition to become an actor, according to Boney. Khushi was later sent to New York Film School in 2019 as part of her preparation for the acting industry.

When asked if Khushi had always aspired to be an actress and follow in the footsteps of her late mother, Sridevi, he stated that children don’t have dreams from the start.

He claims that as children reach the age of 19-20, they begin to consider making a final decision.  “Who doesn’t like glamour? Who doesn’t like getting attention? Everyone in the world likes it whether it is in the entertainment field, academic field, or sports world,” said Boney.

He also stated that The Archies is the ideal debut project for Khushi. He described the picture as a “dream project,” saying that it has the benefit of bringing older people on a nostalgia trip because everyone has been a great fan of Archie. Boney stated, “It is a double whammy. The youngsters in any case will revel in the iconic world of The Archies.”

Boney further remarked that if Sridevi had been present, she would have backed Khushi just as she had Janhvi. He also stated that he has always encouraged his four children (Khushi, Janhvi, Arjun, and Anshula) to pursue their dreams. “I am a friend first, then a father. Now, I am a father and mother both. I am doing my best and I hope to remain this way and get along with all my children. Today, we are bonding really well. I can’t replace their mother but I will try do the best I can,” said Kapoor.