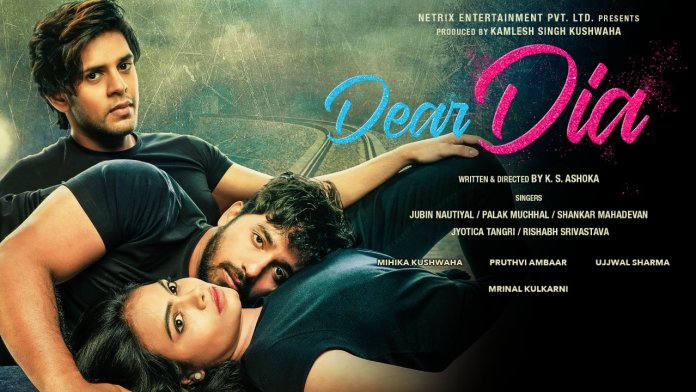 Regardless of how much we enjoy South Indian Movies in their original form, their Hindi adaptations have a distinct impact. Now with another movie release around the corner, we have a Hindi remake of the super hit Kannada film ‘Dia’, titled as ‘Dear Dia’.

Dia, a young timid girl, falls in love with Rohit, her senior, and waits three years to reveal her feelings. However, soon after, they are involved in an accident, which makes Dia’s predicament worse. When Dia eventually starts dating Adi after several upheavals, she discovers that Rohit is still alive. What follows will astound you.

Mihika Kushwaha is making her debut in the film industry with Dear Dia. Talking about her movie, Mihika Kushwaha says, “We have grown up watching Bollywood movies where the love triangles were always idealistic. But this film has something unique about it. It all feels very real and practicable. We hope that Dear Dia touches your heart and leaves you awestruck.”

When asked, “Many love triangle films have been made. What makes Dear Dia unique?” The Producer stated “The treatment given to the film is different. The climax is unusual from the typical happy endings of Indian cinema. It will be difficult for audiences to judge things as the story moves further.”

“Are there any recollections from the set of Dear Dia that you’d want to share?” Kamlesh Singh Kushwaha shared that “Once, during the winter shoots, we shot for almost 16 to 18 hours, and had to stop the shoot because of extreme fog at around 3 am. Next, we were shooting at Medanta Hospital in Lucknow. Mihika and Ujjawal were seriously injured in a scene, so the makeup that the artist did was so real that it felt as if they were really injured in an accident. Both the actors had bandages rolled over their body parts, blood oozing out of the plaster and a lot of marks on their bodies. When the actors were roaming the hospital, hospital staff and other people asked them to sit and relax as they thought they were seriously injured, but they did not know that both of the actors were in the character’s ensembles.”

“Did you feel any strain or weight while filming Dear Dia because it is an adaptation of a blockbuster film?” to which he replied that “Since the shoot was done for more than 50 days, we found it difficult in managing all the artists’ dates. But we survived.”

“How excited are you for ‘Dear Dia’?”- “The film Dia was released in the year 2020 and left a cosmic number of people astounded with its unthinkable storyline. And now, recreating the same script with more impactful lines and songs has urged people to sit on the edge of their seats.”

Lastly, “Do you believe Dear Dia will be a box office success?” to which Dear Dia movie’s producer replied that “It was a super hit movie in the Kannada language with no songs and we have added four beautiful songs, sung by iconic singers like Jubin Nautiyal, Shankar Mahadevan, Palak Muchhal and Jyotica Tangri. And the movie is going to blast.”

Previous articleCirkus, Merry Christmas, and Tiger-Ganapath Kriti’s are all poised to fight at the box office this Christmas
Next articleNeetu Kapoor blesses photographers; onscreen bahu Kiara Advani refers to her as her “favourite mother in law”