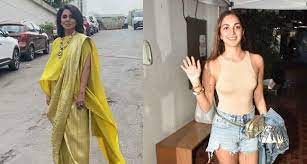 Neetu Kapoor has been in the news a lot lately because to her forthcoming film Jug Jugg Jeeyo. Varun Dhawan, Kiara Advani, and Anil Kapoor feature in the film, which is directed by Raj Mehta. The filmmakers are going all out to promote the film. In the midst of all of this, Neetu is currently giving off serious Jug Jugg Jeeyo vibes. The senior actress was recently photographed in the city, looking stunning in a yellow and gold saree with a trendy neckpiece.

In the video, Neetu is seen thanking the photographers as she walks towards the sets, wishing them ‘Jug Jugg Jeeyo.’ Clearly, she’s adding to the hype around Raj Mehta’s film. Kiara Advani, Neetu’s onscreen bahu, has now shown her affection for the elder actress. Kiara will be seen in Jug Jugg Jeeyo as Neetu’s daughter-in-law. Kiara said on her Instagram story about Neetu’s video, “Mine and everyone’s favourite Mom-inLaw @neetu54 aunty #jugjuggjeeyo” along with heart emoticons.

A source told us about Jug Jugg Jeeyo, saying, “It’s a tale of two couples from different generations, entangled around the issues post marriage. The premise beautifully merges the generation gap, and puts out a unique point about love, but with ample of humour. Though the key characters of both the films are two couples, the treatment and the story is in a complete different space. Jug Jugg Jeeyo is more about families, and the bond a married son with his father and mother played Anil and Neetu.” It’s worth noting that this will be Kiara’s first cooperation with Varun. This year’s Jug Jugg Jeeyo is set to be released on June 24.