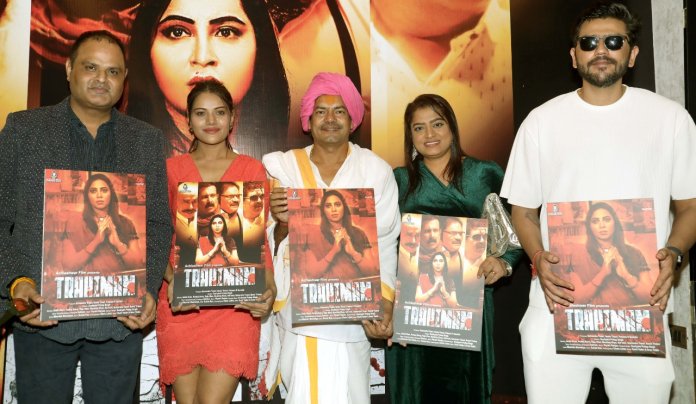 The massacre in Rajasthan is depicted in the movie’s trailer. The movie tells a tale of crime and criminals, as well as of power, corruption, animosity, and exploitation. The movie contains a lot of noteworthy speech. “Truth is my name, I do not like falsehoods,” says a conversation.

Sumendra Tiwari, the film’s producer, stated that after hearing Trahimam’s narrative as told to him by author Salman Ji, I felt it to be really distinct and different. Based on a true event that occurred in a hamlet close to Kanpur, this tale. I want to congratulate Dushyant on filming this movie during the Corona era.

The fact that Radhe Radhe Babuji came to bless us, according to Dushyant Pratap Singh, is a matter of good fortune for all of us. For the first time, Radhe Radhe Babuji attended a movie event. I also want to thank the media for their unwavering support.

I warmly applaud Dushyant Pratap Singh for creating a movie about such a difficult topic, remarked the chief guest Radhe Radhe Babuji. He used the film’s plot to hold up a mirror to society. The horrors done against women in modern society are shown in Trahimam. This movie will definitely be a smash hit.

According to Dushyant Pratap Singh, Trahimam contains 68 characters. Champa, a worker in the movie, is portrayed by effervescent actress Arshi Khan. One of Arshi Khan’s select few top flicks will be this one. Many artists have produced excellent work, including Pankaj Berry, Aadi Irani, Mushtaq Khan, and Ekta Jain.

According to actress Ekta Jain, this is my second movie with Dushyant ji. I played the part of a severe lawyer in this movie.