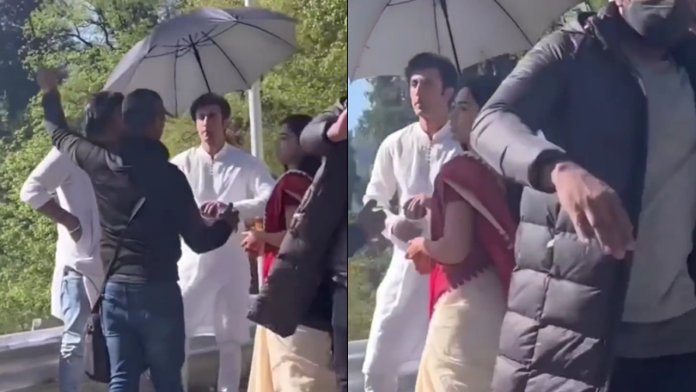 Ranbir Kapoor, who just broke millions of hearts by marrying Alia Bhatt, has returned to work following the wedding. Fans can’t stop talking about the actor’s trip to Manali earlier this week to shoot Sandeep Reddy Vanga’s Animal opposite Rashmika Mandanna. Now, we’ve obtained a leaked video from the sets of Animal in Manali, in which Ranbir and Rashmika appear to be debating a roadside shot.

Ranbir and Rashmika were dressed in ethnic wear in the video. Rashmika was dressed elegantly in a cream saree with a crimson border, while Ranbir wore a white kurta-pyjama. The two were observed standing on the side of the road, conversing with the team. It’s worth noting that this is the first time Ranbir and Rashmika have shared the screen together, and they nailed the ethnic look. It will also be a pan-India production that would be launched in Hindi and all South Indian languages, according to reports.

Check out this leaked footage from Ranbir Kapoor and Rashmika Mandanna’s Animal shoot in Manali:

Ranbir is also said to be undergoing a major metamorphosis for the film Animal. Shivoham, his trainer, spilled the beans about it. “It definitely is going to be some kind of a transformation. In the first schedule he said, they are not going to reveal much, probably that will be in the latter part. So I think we have plenty of time (to train)”.

Previous articleIn this new ad for Bhool Bhulaiyaa 2, meet Kartik Aaryan’s ‘Saheliyan’ 
Next articleTiger Shroff admits to trying his hand at acting in Hollywood and failing: It’s my ultimate objective, and I’m still working towards it