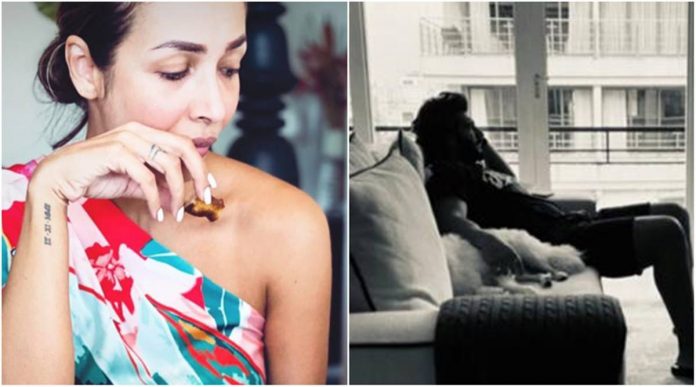 Bollywood diva Malaika Arora took to social media on Sunday and posted a monochrome snap of her actor boyfriend Arjun Kapoor sitting on the sofa with her dog, Casper. The duo is spending some quality time together. Malaika Arora has prepared an elaborate lunch for the actor at her place. She shared pictures of the lunch spread on her Instagram stories.

Malaika took to her Instagram stories on Sunday, August 1, to share a snap of the Half Girlfriend actor along with her pet Casper. Captioning it she wrote, “My Sunday view. Arjun shared the same post on his Instagram stories and wrote, “She’s got the best view ever.”

Arjun also shared Malaika’s picture on his Instagram stories, and captioned it, “The pasta and the maker @malaikaaroraofficial.”

Malaika Arora shares a snap with Arjun Kapoor on his birthday

On June 26, on Arjun Kapoor’s birthday, Malaika had shared a love-filled snap to wish him. She captioned the post, “Happy birthday sunshine,” followed by a heart emoji.

Meanwhile, on the work front, Arjun Kapoor will be seen next in Bhoot Police, alongside Saif Ali Khan, Yami Gautam, and Jacqueline Fernandez. The horror-comedy is directed by Pavan Kirpalani and produced by Ramesh Taurani and Akshai Puri. The film is scheduled to release on September 17 on Disney+ Hotstar.

He also has Mohit Suri’s Ek Villain Returns in his pipeline. The film also stars John Abraham, Disha Patani, and Tara Sutaria. The action thriller film is set to release on February 11, 2022.