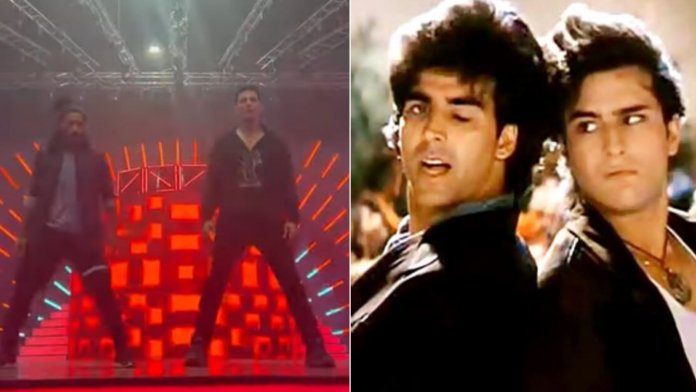 Saif Ali Khan’s birthday is today, and Akshay Kumar, who co-starred with him in Main Khiladi Tu Anari, wrote a humorous birthday message for him.

In the Bollywood industry, Akshay Kumar and Saif Ali Khan are two highly well-known actors who have been good friends for a very long time. Both celebrities have terrorized the screen with a number of box office hits. The pair is renowned for their close relationship, and their most well-known collaboration was the 1994 blockbuster Main Khiladi Tu Anari, which also starred Shilpa Shetty.

Akshay Kumar posted a funny birthday message for his partner in crime on his social media account today as Saif Ali Khan celebrates his birthday.

The Bachchhan Paandey actor posted a video of himself dancing to the popular song Main Khiladi Tu Anari from the movie of the same name on Instagram with the caption: “It’s been 28 years but dancing again to the tunes of Main Khiladi Tu Anari for #Selfiee still brings back fondest memories. Especially when it happens to be the birthday of my partner-in-crime in the original, Saif Ali Khan. He’s not on social media but wishes reach nonetheless. Happy Birthday, brother!”

Together, Akshay Kumar and Saif Ali Khan have produced a lot of films. These include Aarzoo, Tu Chor Main Sipahi, Keemat – They Are Back, and Yeh Dillagi. They last appeared together in Vijay Krishna Acharya’s action comedy Tashan from 2008, which also starred Kareena Kapoor Khan in the main role and Anil Kapoor as the antagonist.

In the meantime, Akshay’s next acting projects include Ram Setu, Selfiee, OMG 2 – Oh My God! 2, Bade Miyan Chote Miyan, and the as-yet-untitled Soorarai Pottru remake. Saif, on the other hand, will play the major role in the next film Vikram Vedha, which also stars Hrithik Roshan and Radhika Apte. Along with Prabhas, Kriti Sanon, and Sunny Singh, he also has Adipurush.