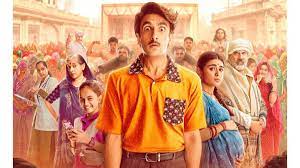 The trailer for Ranveer Singh’s Jayeshbhai Jordaar was released a few days ago and garnered a favourable response from the public. While fans anxiously await the film’s debut, it has suddenly found itself in legal problems due to the trailer’s depiction of a prenatal sex-determination sequence. In the film, the Gully Boy actor plays Jayeshbhai Patel, a Gujarati man married to Mudra Patel (played by Shalini Pandey), who is fighting for the life of his unborn girl child.

The Delhi Court has challenged Jayeshbhai Jordaar over the sequences in the trailer, according to Live Law. The portrayal of prenatal sex determination is’statutorily banned,’ according to the petition submitted by counsel Pawan Prakash Pathak. He also hopes that the scene will be ‘removed on the grounds that it promotes illegal acts.’

However, the comedy-drama picture will be released in theatres on May 13th of this year. Divyang Thakkar, an actor-turned-director, makes his directorial debut with this film, which is produced by Aditya Chopra and Maneesh Sharma under the banner of Yash Raj Films. Aside from Ranveer and Shalini, Boman Irani, Ratna Pathak Shah, and Deeksha Joshi play supporting parts in the movie.

Apart from that, Ranveer Singh has a number of intriguing projects in the works. With Alia Bhatt, Dharmendra, Shabana Azmi, as well as Jaya Bachchan, he will the next be featured in Karan Johar’s Rocky Aur Rani Ki Prem Kahani. The Bajirao Mastani actor also has Rohit Shetty’s Cirkus and the Hindi version of the Tamil movie, Anniyan.