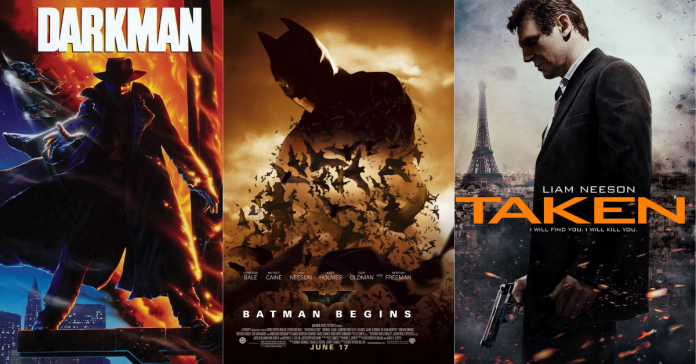 Liam Neeson, the actor with a unique set of abilities, is just getting better as he gets older. To wish the actor from Northern Ireland a happy birthday, we’ve compiled a list of his top 5 flicks. While we admire his present role as the face of the ‘dad action’ genre, we could only fit a few of those films into our schedule.

1. Darkman (1990): In Sam Raimi’s entirely original superhero film, which has since garnered a cult following, Neeson plays Peyton Westlake, a scientist left for dead who seeks vengeance on the ones who burned him alive.

2. Schindler’s List (1993): Neeson is at his most riveting and sad in Steven Spielberg’s haunting Oscar-winner as German businessman Oskar Schindler, who gradually becomes worried for his Jewish staff after witnessing their persecution by the Nazis in Poland during World War II.

3. Batman Begins (2005): Early on, he is known to Bruce Wayne as Henri Ducard, a League of Shadows member who trains the beleaguered billionaire determined to bring justice to Gotham City, later revealing himself as Ra’s al Ghul, the organization’s leader whose extremist plan must be stopped before more harm is done to the troubled city.

4. Taken (2008): It’ll always be known as the Liam Neeson film, a throwaway B-movie about a retired CIA agent who travels across Europe to utilise his specialised abilities to rescue his estranged daughter, who has been kidnapped by traffickers while on a trip to Paris.

5. The Grey (2012): The one in which Liam Neeson is up against a pack of wolves. All you had to say was that. We were hooked from the start, and Joe Carnahan’s harsh survival thriller set in the Alaskan tundra delivered on all fronts, including philosophical themes about man and nature.

Previous articleWhich are Jason Statham’s most famous movies?
Next articleWhich is the most remarkable movie to date?