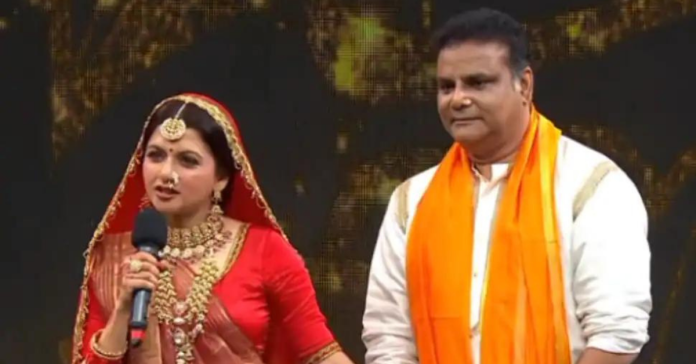 Smart Jodi: Bhagyashree breaks down on the show, ‘There was no one at my wedding’

Bhagyashree who shot to fame from Sooraj Barjatya’s 1989 film Maine Pyar Kiya is now participating in Star Plus’ new reality show Smart Jodi. The actress renewed her wedding vows on the show with her husband Himalaya Dassani. In a video shared on the official Instagram handle of Star Plus, Bhagyashree can be seen exchanging jaimalas with her husband.

The actress broke down and recalled how her family refused to attend her wedding. She added, “Mere liye shaadi mein koi nahi tha, sivaaye inke. Jab maine mummy papa se kaha ki main shaadi karna chahti hu inse, woh nahi maane. (There was no one at my wedding except him. When I told my parents that I wanted to marry him, they did not agree to it).”

“Maa baap ke baccho ke liye sapne hote hain lekin baccho ke apne sapne bhi hote hain aur kabhi kabhi, unke sapne unhe jeene dena chaiye. Kyuki aakhir mein, unki zindagi hai, unhe jini hai (Parents have dreams for their children but the children also have dreams of their own. And sometimes you should let them realize their dreams. At the end of the day, it’s their life that they need to live),” the actress said.

For the unknown, Smart Jodi is a reality show in which real-life partners will compete against each other in an entertaining task. Gaurav-Ritu Taneja, Monalisa-Vikrant, Ankita Lokhande- Vicky Jain, Balraj-Deepti, and Arjun Bijlani-Neha are some of the celebrity couples who are participating in the show.

Previous articleChef Vikas Khanna pens a heartfelt note on sister’s death, celebs offer condolences
Next articleRoadies 18: Sonu Sood on hosting the show ‘I am overjoyed to begin the shoot’