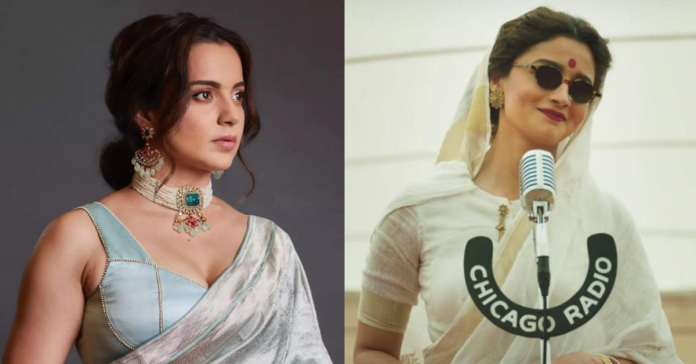 Now, Kangana took to her Instagram today and penned, “Happy to hear theatres are being revived in South film industry with record-breaking collections. I hear some baby steps are being taken in the Hindi belt also. With recent female-centric film which has a big hero and a superstar director. They may be baby steps but they are not insignificant. They will be crucial for theatres that are on ventilators here. Great.”

“Never expected that movie mafia will rise to the occasion and do something good. If they do we will be absolutely appreciative. Hoping for the best,” the actress added.

Earlier, Kangana slammed Alia Bhatt and her appearance in Gangubai Kathiawadi. She indirectly called Mahesh Bhatt a ‘movie mafia’, and his daughter Alia ‘daddy’s angel’. She wrote on her Instagram Stories, “This Friday 200cr will be burnt to ashes at the box office … for a papa (movie mafia daddy) ki pari (who likes to keep a British passport) because papa wants to prove that romcom bimbo can act… biggest drawback of the film is wrong casting…yeh nahi sudhrenge (these people won’t change) no wonder screens are going to South and Hollywood films … Bollywood is destined for doom jab tak movie mafia has power…”

In another Instagram story, she added, “Bollywood mafia daddy papa Jo who has single-handedly ruined the work culture in the film industry, has emotionally manipulated many big directors and forced his products of mediocrity on their cinematic brilliance, another example will be following soon after this release… people need to stop entertaining him, in this Friday release even a big hero and greatest director are the new victims of his manipulations…”

On the professional front, Kangana will be seen in Dhaakad and Tejas. She will also be seen hosting the reality show Lock Upp. The show will be streaming on Alt Balaji and MX Player on February 27.

Previous articleShibani Dandekar and Farhan Akhtar shares wedding pictures after saying ‘I do’
Next articleRakul Preet Singh share a glimpse of her exotic vacay in the Maldives, SEE PIC