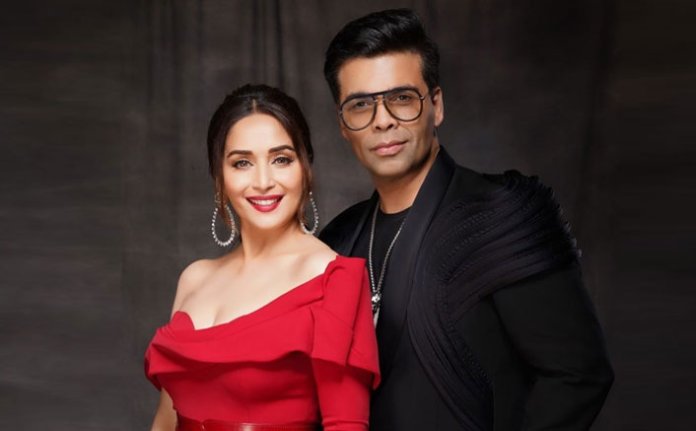 Madhuri Dixit, a Bollywood actress, is prepared to dazzle the audience with her forthcoming family comedy Maja Ma. Her supporters have been anxiously awaiting any developments on the movie ever since it was first revealed. The first song from Maja Ma, named Boom Padi, was just released a few days ago, and fans were in amazement at Madhuri’s energizing performances in the Garba anthem. Finally, Maja Ma’s trailer has been published, and it appears that Karan Johar is really pleased with it.

Maja Ma also stars Gajraj Rao, Ritwik Bhowmik, Barkha Singh, Srishti Shrivastava, Rajit Kapur, Simone Singh, Sheeba Chaddha, Malhar Thakar, and Ninad Kamat in significant parts. Madhuri Dixit is the film’s only other prominent actor. In the movie, Madhuri Dixit plays Pallavi, and the trailer shows a sequence of incidents that jeopardise her son’s engagement. On his Instagram account, Karan Johar said how eager he is to see the film. Additionally, he made note of a “major twist” and praised the film’s creators for maintaining the mystery by not revealing it in the trailer.

“I can’t wait to watch this dramedy with a beating heart and a big twist…which is very smartly not revealed in the trailer!!!! Big love and luck to the eternally gorgeous @madhuridixitnene and the entire team for #MajaMaOnPrime!” wrote Karan Johar. Check out his Instagram story below.

Maja Ma, directed by Anand Tiwari, is a Leo Media Collective and Amritpal Singh Bindra production. Madhuri Dixit remarked in reference to her Maja Ma persona, “It is a role with complex nuances that I have never played before. Pallavi Patel carries enormous responsibility around – as a mother, as a wife, and as a contributing member of society with such ease and grace, that it becomes easy to overlook her strength, conviction, and resilience. She goes through a multitude of emotions that could have strong repercussions on her life and the lives of people she loves.”

Previous articleDev and Amrita, according to Ranbir Kapoor, are the trilogy’s most fascinating characters
Next articleHrithik Roshan appears in Brahmastra Part 2, Read his comment on mythology and more