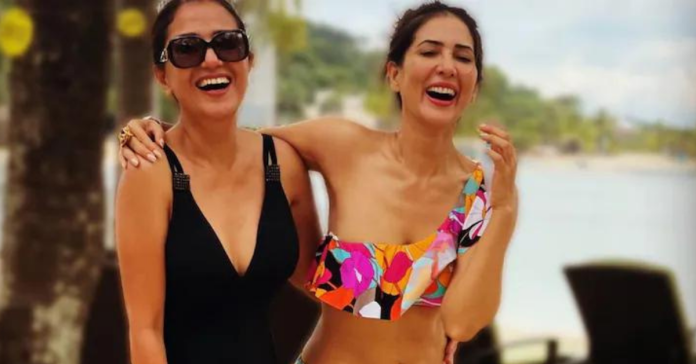 Kim Sharma recently made headlines after she made her relationship official with tennis player Leander Paes. And now, the actress is back to making head turns with her Uber cool style statements. She took to Instagram on Friday and shared pictures of herself wearing a printed bikini.

Kim Sharma dropped two oh-so-hot pictures from her stay in Singapore. She flaunted her toned body wearing a colorful, one-shoulder bikini set. Kim posed alongside her sister, Konnika Sharma. Sharing the picture, she wrote, “Happy 50th to my biggest constant strongest safe place. I love you B @konikasadler #sistersister #myworld.”

When the first picture of Kim and Leander was out, fans and followers got a sweet surprise. While the duo didn’t react to speculations then, it later came out to be true. Kim’s Valentine’s Day post for her beau Leander was adorable. The caption read, “Roses are red, violets are blue, every day I thank Jesus for giving me You! Happy V day baby.”

Meanwhile, professionally, Kim Sharma made her acting debut with Yash Raj’s Mohabbatein in 2000. She was last seen in the film, Loot in 2011.