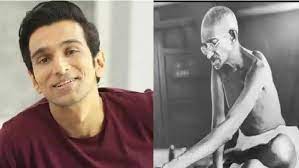 Pratik Gandhi has been cast in a drama series based on Ramchandra Guha’s biographies as Mahatma Gandhi.

The rights to two of acclaimed historian Ramachandra Guha’s most authoritative works on Mahatma Gandhi have been bought by Applause Entertainment. Applause Entertainment, a subsidiary of the Aditya Birla Group, has announced a major biopic on the life of ‘Gandhi,’ bringing to life the time of Indian Independence through the eyes of our greatest freedom warriors. A premium, multi-season series based on the works of famous historian and novelist Ramachandra Guha will be adapted from his two books – ‘Gandhi Before India’ and ‘Gandhi – The Years that Changed the World.’ The series will be created to international standards for a global audience and will be shot in a variety of Indian and international locales.

Pratik Gandhi has been cast in the role of Mahatma Gandhi by Applause Entertainment to portray the remarkable life and times of India’s greatest contemporary icon and the father figure of the Indian liberation fight. The series will highlight the lesser-known tales of Gandhi’s life that had a crucial part in turning him into a Mahatma, from his early days through his acts in South Africa to the great battle in India. It will also recount the experiences of all of his fellow freedom fighters and contemporaries, remarkable individuals who, like him, were part of the revolution.

‘Gandhi’s work revolutionised the globe, and his legacy still provokes the most impassioned arguments,’ said renowned historian and biographer Ramachandra Guha. His life was a grand adventure that took him to three big countries: India, England, and South Africa. He battled valiantly for liberty, interfaith tolerance, and the rights of the oppressed. He made a lot of friends and a lot of enemies along the road. I’m thrilled that Applause Entertainment is adapting my Gandhi novels for this ambitious and entertaining series. I am convinced that it will convey to people all across the world the intricate contours of Gandhi’s life and the moral substance of his teachings.