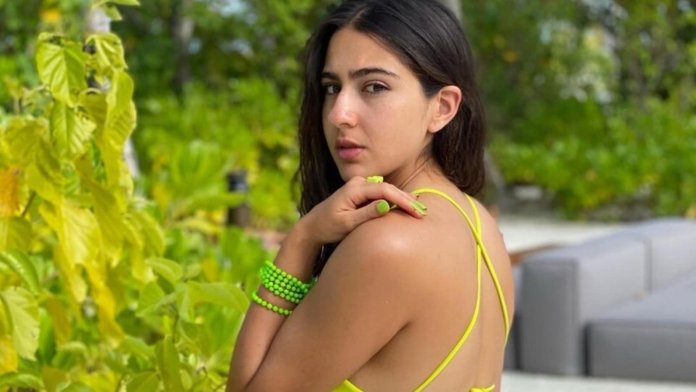 The upcoming film starring Vicky Kaushal and Laxman Utekar will include Sara Ali Khan in it.

Sara Ali Khan frequently shares Instagram pictures and videos of her workouts, and she never misses an opportunity to share fitness inspiration. With the romantic drama Kedarnath and the action comedy Simmba, the actress launched her acting career in 2018. Both movies had good box office results. Sara has established herself in Bollywood’s glitzy world despite having only a few films to her name thus far. We have all witnessed the actress’ dramatic weight loss, and she is constantly improving her physique.

Sara Ali Khan just uploaded a video of herself performing squat jumps on her Instagram account. The actress from Love Aaj Kal captioned it, “Woke up feeling lazy”.

Despite her laziness, Sara managed to find motivation, and her example will undoubtedly inspire you to do the same. She may be seen in it sporting a grey sports bra and workout shorts. One can clearly notice the new shine on Sara’s face after a strenuous workout because she also donned gym sneakers and kept her hair in a ponytail.

Sara Ali Khan is currently developing a number of films for the big screen. She most recently appeared in the Aanand L. Rai-directed romantic fantasy drama film Atrangi Re with Akshay Kumar and Dhanush. Sara Ali Khan will next be seen in Gaslight with Vikrant Massey and Chitrangada Singh. It is under Pawan Kriplani’s direction. She will also appear with Vicky Kaushal in the next, as yet untitled movie from producers Dinesh Vijan and Laxman Utekar. This film, which is expected to be a romantic comedy, will be her first collaboration with the Uri: The Surgical Strike star.