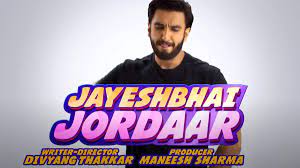 Jayeshbhai Jordaar, according to Ranveer Singh, would revolutionise the “concept of heroism on screen”

Today marks the debut of the trailer for the forthcoming flick Ranveer Singh, Jayeshbhai Jordaar. It’s billed as a social comedy, with the Bajirao Mastani star playing a Gujarati guy in the title character. Shalini Pandey, who is well known for her role in Arjun Reddy, will make her Bollywood debut in this film. It is directed by Divyang Thakkar, who is making her directorial debut. Jayeshbhai Jordaar is set to be released internationally on May 13, 2022, and will star Boman Irani and Ratna Pathak Shah.

Now, the Gully Boy actor Ranveer Singh has said in a recent interview with Mid-Day that Jayeshbhai Jordaar will redefine heroism on television. He claimed he enjoyed being a part of the film since it forced him to develop a character with “no precedent in Hindi cinema.” Ranveer also claimed that Jayeshbhai is not your normal hero, adding that he is one of Hindi cinema’s most endearing characters.

The actor added, “Jayeshbhai will leave people with an important message in the most entertaining and hilarious fashion. Here, the hero is the most innocent and honest person you have met in a long time.” Talking about his character in Jayeshbhai Jordaar, he said that he is ‘quick-witted and his heart is in the right place. Calling the script ‘remarkable,’ he said that films like these can’t be found every day. “It is a celebration of human spirit that will fill you up from within,” Singh said.

Ranveer Singh will next be seen in Rohit Shetty’s Cirkus, a film adaption of Shakespeare’s comedy The Comedy Of Errors. He also has Alia Bhatt in Karan Johar’s Rocky Aur Rani Ki Prem Kahani.