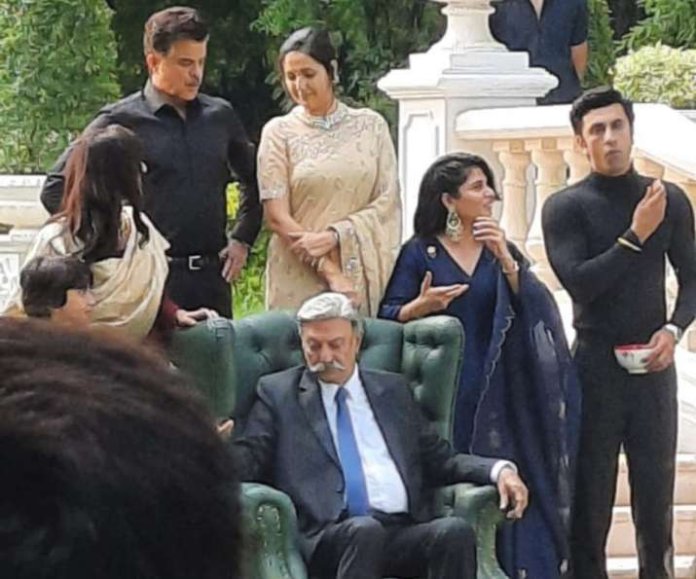 Among Bollywood’s most adored actors are Anil and Ranbir Kapoor. They have a distinguished record that includes roles in blockbuster movies like Raajneeti, Yeh Jawaani Hai Deewani, Nayak, Tezaab, and many more. Sandeep Reddy Vanga’s Animal is the first time the performers have worked together on cinema. The team is making headlines not just for their most recent films, Shamshera and JugJugg Jeeyo, but also for a set photo that has leaked online.

Ranbir Kapoor, Anil Kapoor, and the rest of the cast and crew of the movie are shown together in the Pataudi Palace in Delhi’s courtyard in the widely shared photo. Ranbir and Anil had really fashionable facial hair and looked quite polished. Ranbir Kapoor wore a black turtleneck full-sleeved t-shirt with black pants, while Anil Kapoor was dressed in a full-sleeved black shirt. Ranbir Kapoor also had a meal dish in his hand, which added to the absurdity of the whole situation. This family criminal drama is surrounded by a lot of mystery and intrigue. An Instagram user going by the handle @anamkhanmakeup posted a picture of the Animal cast taken on the set.

Along with Ranbir and Anil, Animal also features Rashmika Mandanna and Bobby Deol in its ensemble cast. On September 11, Ranbir will next be seen by the Ayan Mukerji’s Brahmastra, which also stars Alia Bhatt, Amitabh Bachchan, Mouni Roy, and Nagarjuna Akkineni. After that, he’ll appear with Shraddha Kapoor in Luv Ranjan’s untitled romantic-comedy-drama, which debuts on Holi 2023. Anil Kapoor, who recently mesmerised viewers with Thar and JugJugg Jeeyo, has a number of films coming out over the next several years. Aside from Animal starring Ranbir Kapoor, which debuts on July 4th 2023, he can be featured in Fighter with Hrithik Roshan and Deepika Padukone as well as No Entry Mein Entry with Salman Khan and Fardeen Khan.