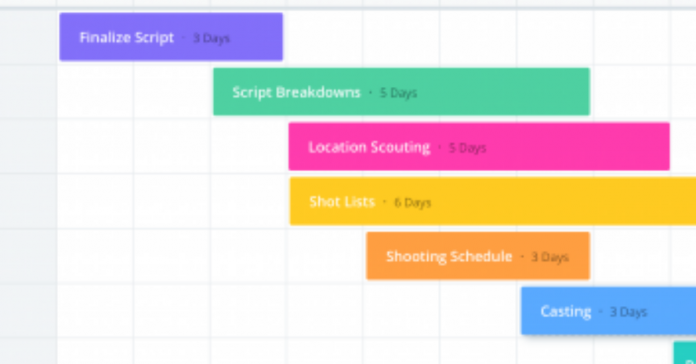 A movie is a complex mechanism with numerous moving parts. You must run a tight ship in order to function efficiently, or even to function at all. Creating a production schedule is the most significant approach to do this. The chore of creating a production schedule is not easy. It necessitates effort as well as organizational abilities. As you plan your film production timeline, here are certain steps to take and things to bear in mind.

Reading and annotating the script is the first stage in the process of constructing a production schedule. Simply reading the script a few times can help you figure out which scenes are the most vital to the story, which will take the longest to shoot, and which will be the most difficult. As you’ll see, this can have a big impact on how you set up your production schedule.

A breakdown sheet is used to keep track of everything that will be in a certain scene. Cast members, extras, props, costumes, makeup, stage decorating, and any other possible aspects such as flora or animals are all included.

You must first estimate how many days you will be filming for your film before you can work out the mechanics of your production plan. According to Studio Binder, shooting one-eighth of a page will take approximately 15 minutes. As a result, you can estimate that shooting one page of your script will take 120 minutes or 2 hours.

The same can be said for your ensemble. It’s highly likely that your protagonist appears in every scene in your short film. Allow time for your protagonist to rest so that he or she is always ready to deliver a stellar performance.

Also READ: How can I get a job in Hollywood movies?

Previous articleHow is the movie Oldboy?
Next articleWhich Hollywood actor passed away recently?