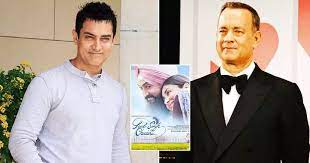 Tom Hanks’ response to Aamir Khan in the next film “Laal Singh Chaddha” is something Aamir Khan is interested to learn about.

Aamir , who is preparing to premiere his forthcoming film ‘Laal Singh Chaddha,’ says he is looking forward to seeing Tom Hanks’ reaction to the Bollywood rendition of the legendary film ‘Forrest Gump.’

When it comes to the subject, Aamir says: “Forrest Gump is an iconic film. I am very curious to see how Tom Hanks reacts after watching the film. He is a wonderful actor”.

Interestingly, at a meeting with Steven Spielberg, Aamir Khan met Tom Hanks. Spielberg was in Germany at the time, filming a film with ‘Forrest Gump’ actor Tom Hanks.

Aamir was also introduced to Hanks by Spielberg, who dubbed him the “James Cameron of India.”

Also Read: New photos of Aamir Khan and his son Azad eating mangoes will make you desire the king of fruits right now