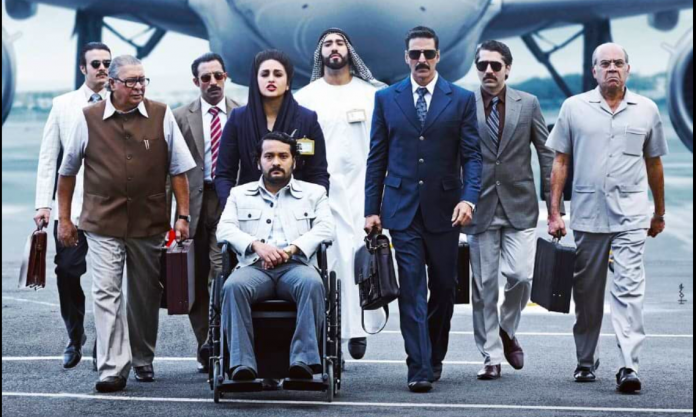 Akshay Kumar is back as a special RAW Agent on a mission and this time around he is gone all retro! Set in the 1980s, when radicals were keen on hijacking Indian air plans to get political prisoners out or demand ransom, this was probably the only mission where Indian special agents got the plane back without meeting any undue demand or blood-shed, and that’s the core of BellBottom.

Undisputed Champion of Patriotic Dramas, Akshay Kumar is accompanied by Vaani Kapoor, Lara Dutta, and Huma Qureshi in the film, which is directed by Ranjit M Tewari.

Needless to say, the film is high-on patriotism, call of duty, sacrifice, and plenty of twists and turns to keep the audience hooked to the big-screen, as we all know it has a happy ending!

Driven by personal grief, as his mother dies during a plane hijacking, Akshay Kumar is smart, suave, and slick as a RAW agent, he dresses up well, talks well, and when needed slips into action mode with a drop of a hat.

Vaani Kapoor’s role is small but powerful and impactful, and there is a little spoiler alert, she isn’t what you think she is!

Lara Dutta plays the role of Indira Gandhi and Huma Qureshi as special agents working for the Dubai government.

The build-up is gripping and doesn’t offer any loopholes in the story; the canvas of the film is massive, so one can be sure of beautiful shots and scenic locales. The makers, Pooja Films and Emmay Entertainment have a put up a great movie.

The film, a spy-thriller is a good watch, despite the fact that Shershaah and Bhuj -The Pride Of India, released recently. The film offers a new story, new plot, new premise, and great story-telling laced with superb performances, it is worth your time!

Next articleIs Kurbaan a good movie?