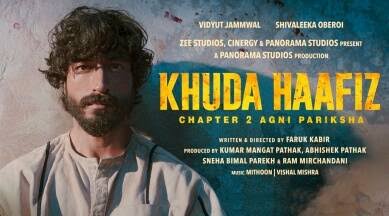 As a radical departure from the typical Vidyut Jammwal action film, Khuda Haafiz shocked everyone when it was released in 2020. He had to hold back all of his martial arts prowess and opt for a gritty, realistic fight style, which, ironically, worked better for him than most of his hardcore action movies.

Where to watch: Movie Theatres

Personally, I think it’s his second-best film after The First Commando, and Faruk Kabir deserves praise for having the guts to try something new and achieve it successfully. For Khuda Haafiz Chapter 2 Agni Pariksha, the duo is back along with Shivaleeka Oberoi, the first movie’s lead actress.

After taking out the Noman flesh dealers and saving his wife Nargis, Sameer and Nargis live in peace and adopt a daughter named Nandini. Their joy is short-lived, though, as Nandini is taken hostage by a landlady’s goons on her way home from school. Sameer sets out to rescue Nandini and exact revenge on the landlady at the same time.

The movie Khuda Haafiz Chapter 2 Agni Pariksha is a follow-up to the 2020 film Khuda Haafiz and was written and directed by Faruk Kabir. Under the umbrella of Panorama Studios, Ram Mirchandani, Sneha Bimal Parekh, Abhishek Pathak, and Kumar Mangat Pathak are producing the sequel.

After Noman’s accident, Sameer and Nargis are attempting to bring their lives back together. Despite their best efforts, the couple’s hopes for the future are not coming true, but then Nandini, an orphan girl, shows up and proves to be a blessing in disguise for them.

As Nargis gradually recovers from her trauma and focuses her love and energy on Nandini, Sameer, a proud parent, discovers himself relaxing into a regular schedule. Up until a tragic event occurs when Thakur Ji’s (Sheeba Chaddha) son and his buddy abduct Nandini and another schoolgirl, who is then brutally raped and dies.

Nargis, who is unable to cope with the loss of her daughter, departs from Sameer and threatens to stay away until he holds those accountable for her daughter’s passing accountable.

Following a beating of the neighbourhood cop who refused to assist him, Sameer ends up in jail for disobeying the law. This is the point in the movie that his dynamics alter. Sameer befriends Thakur Ji’s adversary group and unleashes his complete fury on everyone. Before travelling to Egypt to locate Thakur Ji’s son and kill him with the same level of misery and pain as was inflicted upon his daughter, he kills everyone and everything.

Dibyendu Bhattacharya and Sheeba Chaddha are seasoned actors who consistently impress with their subtle performances, but Rajesh Tailang’s character is the major surprise because it appears to be a parody of reporter Ravish Kumar. Shivaleeka has put a lot of effort into improving her acting, and she excels.

Also Read: Is the film Khuda Haafiz released on Hotstar?

Previous articleActor Ranbir Kapoor will commemorate his illustrious 15-year career with his followers
Next articleShamshera Movie Review: A slow-moving action movie that centres on freedom and retribution