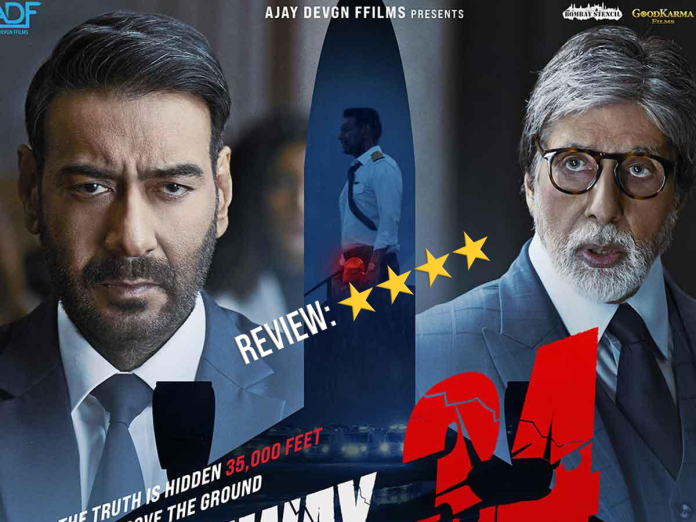 Easily this is his most assured work. Indian superstar, Ajay Devgn who made his directorial debut with U, Me Aur Hum and followed it up with Shivaay, has very cleverly crafted Runway 34–an aviation thriller that turns out to be an absolutely different and delightful cinema experience.

The movie is part adventure, part courtroom drama. And honestly, both the adventure and the drama add to the thrill of the film. The color palette is subtle yet the characters in the film seem vibrant.
While the first half(without giving away any spoilers) is shot in an airplane being flown by Captain Vikrant Khanna(Ajay) and his co-pilot Captain Tanya Albuquerque(Rakul), and all the action is takes place 35000 feet above sea level, the second half has a fantastic court drama with the best lines being mouthed both by Bachhan and Devgn. The Hindi writing of the duo Sandeep Kewlani-Aamil Keeyan Khan is truly worthy of praise.

What happens during that plane ride gone wrong and why is not to be told or discussed. It is to be witnessed because like the pilot says–what happens 35000 feet above is a different truth– from what appears on the ground.
Here one must say that Ajay’s craft as a director is A-grade. He brings to the table only what an astute and
super-sharp technicians can–whether it is by way of camera-work, performances, detailing, or even handling the smallest of actors’ performances.

The other highlight of the film are the performances in the court drama. While Amitabh plays to the gallery, Ajay complements it with his quiet, reassurance as an actor. Rakul is impressive(her best) and Boman Irani shows why it is important to have an actor of his caliber even in a “special” appearance. Aakanksha has an interesting voice and though her part is small, you won’t be able to miss her. Angira is fiesty.

Honestly, when adventure meets drama meets performances and superior technology, cinema-going is a pleasure. Aviation thrillers are not a familiar genre for desi cinemagoers. However, this film cleverly combines some small doses of masala with a lot of styles.