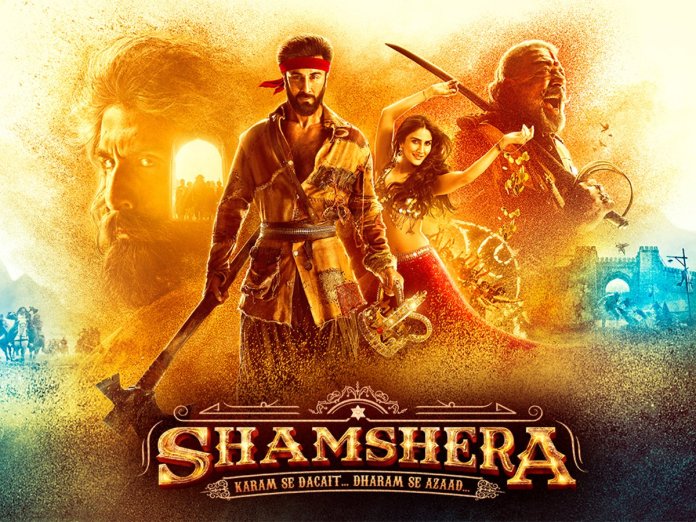 In Shamshera, Ranbir Kapoor is stunning in every aspect possible, including his acting, sex appeal, dancing, litheness in the action sequences, and engaging charisma.

Having been driven from his homeland along with his people, Shamshera (Ranbir Kapoor), a tribal chieftain, is compelled to rob the wealthy, who saw themselves as belonging to a superior caste. An Indian commander in the British military named Shudh Singh (Sanjay Dutt) betrays Shamshera and drags his tribe into slavery with him. Balli (again Ranbir) dedicates his life to this uprising 25 years after Shamshera sacrifices his life fighting to rescue his tribe from the combined clutches of the British and the high-caste people. The main theme of the story revolves around how he frees his tribe and exacts revenge on those who killed his father.

The background music and the sleek VFX-driven graphics immediately draw you into the imagined universe set in late 19th-century India. The video quickly provides a framework for the tribe’s origins and motivations before delving directly into Shamshera’s narrative. From that moment forward, the movie starts to drag. It continues to be a slow-moving action-drama that features a caste-based conflict, a romantic vengeance story, and a run-in with the British Raj.

You’ll be exhausted at the conclusion of the movie, to say so without giving away too many plot points. The picture drags through the length with a number of small, but noticeable technical hiccups, feeling much too stretched for its paper-thin plot. Despite this, Ranbir Kapoor and Sanjay Dutt continue to be the centre of this drama. The performers give sincere performances despite a mediocre narrative, weaker writing, and inferior language. Even if he puts a lot of effort to improve a lacklustre script, it is always a pleasure to see Ranbir on film again after a long absence. Sanjay Dutt also does a good job acting menacingly. In reality, the performers’ interactions on film are very intense each time they appear together.

The supporting players in this drama, such as Ronit Bose Roy, Saurabh Shukla, and Iravati Harshe, don’t really add much to the story. If their characteristics had been chosen with greater consideration and care, it would have been very beneficial. It’s unexpected that they have such limited room to manoeuvre. Even Sona, a dancer played by Vaani Kapoor, falls far short in terms of an emotional arc.

The film’s action choreography is excellent, especially in the sequence just before the intermission and in some of the finale. Some of the songs from the movie’s CD will stick in your head. In conclusion, although director and co-writer Karan Malhotra initially looked to have a magnificent vision, it’s his execution that appears to have let him down. We just wish that it had all been put together more skillfully than what was seen given the scope, the available canvas, and the skills of the producers.