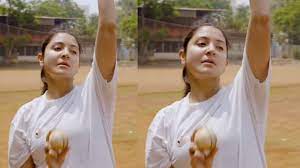 Anushka Sharma prepares for Chakda Xpress in the scorching heat

Anushka Sharma is among Bollywood’s most popular actresses. Fans have been ecstatic when she announced her return to Bollywood with Chakda Xpress. Well, the actress has already been putting in a lot of effort to play cricketer Jhulan Goswami on the big screen. She continues to post photos and videos from her workouts, and today she released a boomerang video of her battling with the heat.

Anushka Sharma is dressed in a white tee-shirt and black track trousers in the photo. Her hair is pulled back into a single ponytail.

She is sitting on the ground in the blazing heat, taking a selfie. We can catch a peek at the cricket pitch behind her in her boomerang. Anushka wrote beside this photo,  “Not at all hot”.

In the meantime, Anushka just celebrated her birthday on May 1st. Virat celebrated the occasion by posting a handful of cute photos with her on Instagram. He also sent a beautiful message that said, “Thank god you were born (red heart emoji). I don’t know what I would do without you. You’re truly beautiful inside out (red heart emoji). Had a great afternoon with the sweetest folks around (smiling emoji) @anushkasharma.”

Anushka Sharma is preparing to appear in a show for the first time in four years. She will soon be in Chakda Xpress, a film based on her tale, in the part of former cricketer Jhulan Goswami. Anushka was last seen with Katrina Kaif and Shah Rukh Khan in Zero.

Also Read: Uday Chopra looks unrecognisable as he gets spotted at the Mumbai airport

Previous articleShah Rukh Khan’s latest photo from the sets of Dunki has surfaced, showing the actor posing with the cast and crew
Next articleGauri Khan congratulates Suhana Khan, Agastya Nanda, and Khushi Kapoor on the release of The Archies first look and teaser