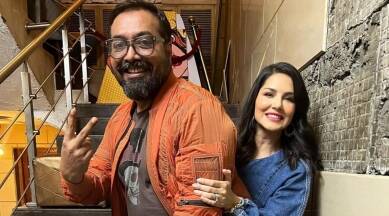 Actress Sunny Leone delivers a statement of thanks after being cast in Anurag Kashyap’s upcoming film.

Actress Sunny Leone describes working with director Anurag Kashyap as a “chance” and considers it a “dream come true.”

Sunny posted a photo of herself and Anurag on Instagram, saying that her career in the Hindi film industry hasn’t exactly been “smooth.”

“Yes my smile is “ear to ear” because dreams do come true! I never in a million years thought someone as amazing like @anuragkashyap10 would take a chance on me. My journey has been amazing but by no means “easy”.”

She added: “After so many years of being in India and in Bollywood I received a call asking if I would audition for a Anurag film.”

The 41-year-old actress says she will never forget that Anurag took this chance.

“There are moments in life where everything changes this is my moment in my head and heart. No matter how things turn out you took a chance on me Anurag Sir and I will never forget that in my life. Thank you for letting me be a part of your amazing film. @dirrty99 & @sunnyrajani my steady rocks guiding me love you!.”

Also Read: Sunny Kaushal recalls being rejected in first audition: I was told I cannot act