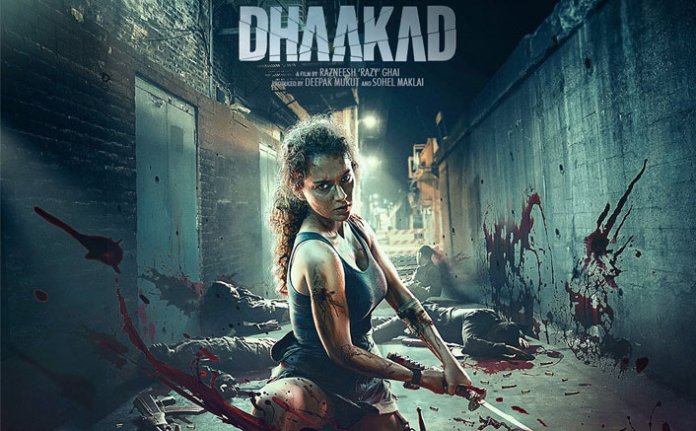 Where to watch: Movie Theatres Near You

Dhaakad, directed by Razneesh Ghai, sets Kangana Ranaut on a pedestal—that of a demigod who can spell death with a single stroke. Ranaut is a true firecracker who lives up to her stage moniker of Agni. She doesn’t waste any time and is all business! Along the way, she obtains firearms and glory. Kangana Ranaut slings lethal weapons across her massive shoulders and strikes her foe with powerful fists. She genuinely epitomises the drive and intensity that galvanises the spirit in this way.

Kangana Ranaut portrays Agni, a highly skilled and dangerous field agent, as those who have watched the trailer already know. Rudraveer (played by Arjun Rampal), a globally infamous people and munitions trafficker who has been off the radar for more than a decade, is entrusted with the deadly task of gathering and finally executing him.

Dhaakad is outstanding since it manages to score high not just on the performance scale, but also wins you over because it succeeds in the technological category. The cinematography is exquisite.

This one is worth watching because of the stunning outfits and unrivalled action moments. However, even at 2 hours and 10 minutes, the film feels lengthy and a little monotonous due to the mind-numbing repetition of certain situations.

Kangana Ranaut as Agni outperforms Charlize Theron’s Atomic Blond in terms of wielding. So much so that you’re prepared to go above and beyond the caricatured hairdo and outfits. The action drama is intertwined with the violent past of the main characters and how their need for vengeance comes to the fore.

Catch The Trailer Link Below:

Also Read: Kangana Ranaut now hails Gangubai Kathiawadi with its ‘female-centric film which has a big hero and a superstar director’