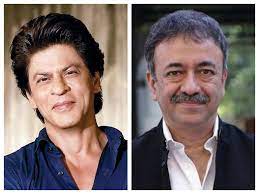 On social media, a photo of Shah Rukh Khan and Rajkumar Hirani has taken on the Dunki set has gone viral.

Since Shah Rukh Khan announced his film series, all eyes have been on him. After he revealed that he will be working on the Dunki movie alongside Rajkumar Hirani, the degree of anticipation among his fans shot through the roof. He is presently filming in London, and various images from the sets featuring his looks have gone popular on social media. SRK and Taapsee Pannu were recently featured in a viral photo taken on London’s streets, and now Rajkumar Hirani, the film’s director, is included in yet another image of the pair.

This image of the Dunki squad from Budapest was posted by the fan page The Faizan. Shah Rukh Khan is seen in the image wearing only black clothing. He appears to be speaking with Rajkumar Hirani and has a serious expression on his face. The director is conversing with SRK while also glancing at him.

In the meantime, he will be featured in the movie Pathaan with Deepika Padukone and John Abraham. Deepika’s debut film appearance was just revealed. In addition, Khan will next appear in Atlee’s much-anticipated movie, Jawan. In addition to sharing the screen with Nayanthara, this will be his first time working with the director. On June 2, 2023, it will be released in theatres throughout the world in five languages: Hindi, Tamil, Telugu, Malayalam, and Kannada.

Following Manmarziyaan, Taapsee will work once more on Dobaaraa with renowned director Anurag Kashyap. Recently, the movie’s trailer was released, and it fascinated and aroused the audience to see what might be described as a “mind-bending thriller.” The movie is scheduled to premiere on August 19, 2022. Also planned for Taapsee is Blurr. This horror thriller, directed by Ajay Bahl, is a remake of Julia’s Eyes, a different Spanish movie. According to a recent article in Mid-Day, a sequel to the pulpy thriller Haseen Dilruba starring Taapsee Pannu, Vikrant Massey, and Harshvardhan Rane would be released.

Also Read: Shah Rukh Khan’s latest photo from the sets of Dunki has surfaced, showing the actor posing with the cast and crew

Previous articleThe portrayal of Mona Singh as the Mother of Aamir Khan has raged Laal Singh Chadha has sparked controversy
Next articleRaksha Bandhan: Akshay Kumar discusses his relationship with his sister in real life; read inside