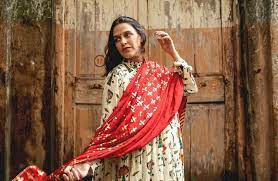 With her Anarkali costume, Neha Dhupia makes a fashion statement and addresses her daughter specifically

Neha Dhupia, who was recently sighted at the Fabulous Lives Of Bollywood Wives Season 2 premiere event, has huge style aspirations.

Since winning the Femina Miss India 2002 competition, Neha Dhupia has ruled the nation’s fashion sector for many years. Neha Dhupia’s aesthetic tends to lean toward perfection. The performer is continually playing with her appearance and succeeds in turning heads. The actress recently wrote a sweet message to her favourite daughter thanking her for encouraging her to choose the clothes at such a young age and sharing a glimpse of her Ganesh Chaturthi celebrations.

The Singh is King actor’s most recent post showed her looking stunning in ethnic attire and acing the scene. Neha chose to dress in a light pink Anarkali with a hint of blue to create an airy look. She accentuated her appearance with understated makeup and complemented her clothing with her smooth, waves. She penned the following in a special letter to her daughter Mehr Dhupia Bedi:

Before relocating to Mumbai and attempting her luck in the acting business, actress Neha Dhupia won the Femina Miss India competition in 2002. She made her screen debut a year later in the 2003 movie Qayamat.

Neha has appeared in a number of movies to date, including A Thursday, Julie, Helicopter Eela, Lust Stories, Shootout at Lokhandwala, Chup Chup Ke, De Dana Dan, Tumhari Sulu, and Chup Chup Ke. She got married to actor Angad Bedi in 2018. The couple is blessed with a boy named Guriq and a daughter named Mehr. Since Season 14, she has also served as one of the MTV Roadies’ top executives.

Also Read: Roadies 18: Sonu Sood on hosting the show ‘I am overjoyed to begin the shoot’