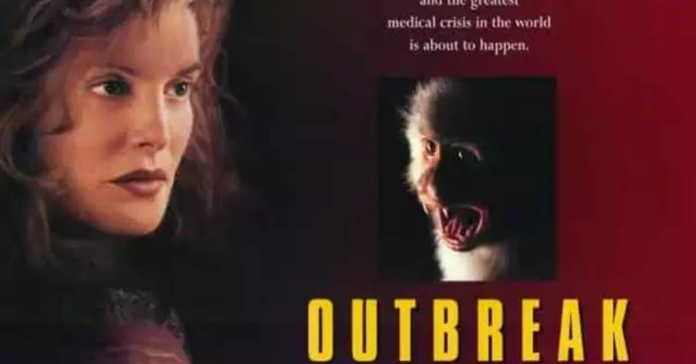 In which Hollywood movie monkeys heal a disease?

The Outbreak is a 1995 American medical catastrophe movie directed by Wolfgang Petersen and based on the factual book The Hot Zone by Richard Preston. Dustin Hoffman, Rene Russo, Morgan Freeman, and Donald Sutherland lead in the picture, which also features Cuba Gooding Jr., Kevin Spacey, and Patrick Dempsey.

In Zaire and subsequently, in a tiny hamlet in California, an outbreak of a fictional ebolavirus and orthomyxoviridae-like Motaba virus occurs. It takes place mostly in the US Army Medical Research Institute of Infectious Diseases and the Centers for Disease Control and Prevention, as well as in the fictional community of Cedar Creek, California. The premise of Outbreak speculates on how far military and civilian institutions would go to stop a deadly, contagious epidemic from spreading.

The picture was a box office hit when it was released on March 10, 1995, and Spacey received two awards for his performance. When the film was released, the Ebola virus was causing a real-life outbreak in Zaire.

Outbreak topped the box office in the United States on its opening weekend, grossing $13.4 million, and remained at the top for three weeks before Tommy Boy was released. The picture was a commercial success, grossing $67.7 million domestically and $122.2 million abroad.

In this suspenseful thriller, a deadly airborne virus threatens society. An outbreak erupts in a California hamlet after an African monkey carrying a fatal virus is brought into the country. To stop the sickness from spreading, a group of doctors is assembled, including a contagious disease expert (Dustin Hoffman) and his ex-wife (Rene Russo). However, after the Army is called in to help, the physicians will have to race against the time to save the town and its citizens.

Also READ: Mrugaraju is a remake of which Hollywood movie?

Previous articleWhich was the first Hollywood movie made on zombies?
Next articleHow is the movie Oldboy?